​Thanks to the generosity and vision of the late John Drescher, Santa Monica College is the home to a computerized planetarium theater. At its heart is the Evans & Sutherland Digistar II planetarium projector, which was the first of its kind on the West Coast. Using digital technology, audiences can fly beyond the solar system and soar among the stars. We can transport you across our galaxy to the limits of spacetime.

Watch this space for more information. Invitation links to the live online events are posted the Thursday before.

NOTE:  Sarah Vincent will be presenting both the 7:00 and 8:00 PM programs.  Time constraints may require that both shows be the "Starbirth in Orion's Sword" program listed for 8:00 pm. 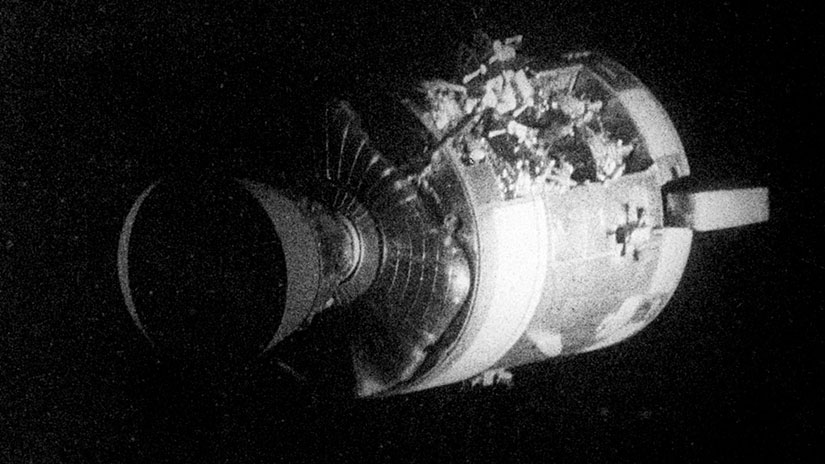 50-Year Retrospective: The Flights of Apollo After Apollo 13 - What Changed? 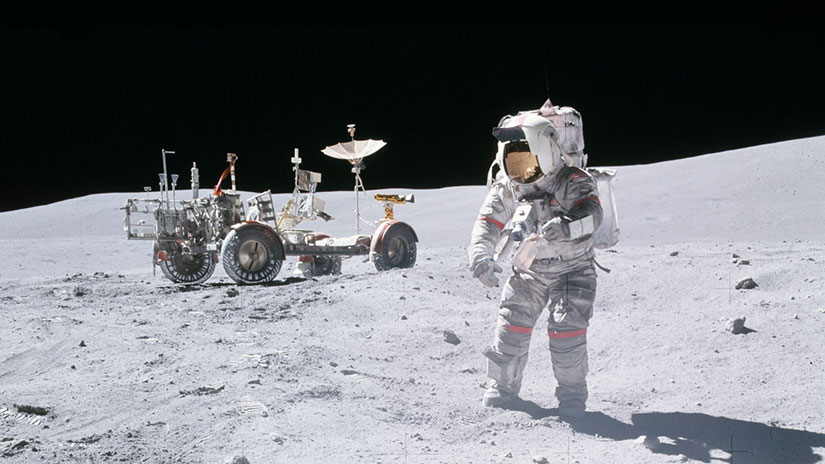 50-Year Retrospective: The Flights of Apollo Back in the Saddle - Apollo 14 + 50 Years

50-Year Retrospective: The Flights of Apollo Back in the Saddle - Apollo 14 + 50 Years The Night Sky programs will last roughly 30 minutes, followed by a short question and answer period where guests can type questions into a chat box and we will answer as many questions as possible. A short intermission will begin at approximately 7:50 prior to the start of the Feature program.

Note that all 8 p.m. feature programs are preceded by the 7 p.m. “Night Sky” program described above.

Sunday Matinees, 10/4 and 11/22
Sunday matinees are presented at 2 p.m. on October 4 and November 22 and will feature abbreviated versions of the Night Sky program and that week’s Feature program.  They will be listed under a separate Zoom invitation link on the planetarium public programs web page.

With the massive SLS booster and Orion Crew Exploration Vehicle moving towards a first uncrewed test flight around the Moon in 2021, NASA is looking towards a long-awaited move beyond low Earth orbit for its human space flights.  We will examine the plans for the return to the Moon under Project Artemis and try to make educated guesses at the probability of making the Trump administration’s goal of a human lunar return by 2024.

As we move through the Autumnal Equinox on September 20th, most of us are only vaguely aware of what the equinoxes and solstices actually are.  We’ll try to remedy this disconnect from the natural world, which makes most modern humans vastly less aware of the rhythms of the sky than our ancestors were. We’ll also try to dispel some myths, like that egg-standing-on-end story!

Hubble Science: Beyond the Beauty

We have all seen galaxy leggings (Maybe you even own a pair, like our lecturer Sarah Vincent…) The Hubble Space Telescope has produced amazing images in its 30 years of service.  But Hubble is more than just the camera that took Sarah’s favorite desktop images, and made the print on those leggings.  It’s one of the most important scientific instruments of the last century.  Join us for a look at the science hidden in some of Hubble’s most iconic images.

What are the Benefits of Going Back to the Moon (Permanently?)

NASA has an administration mandate to get boots back on the Moon by 2024. China is ramping up their crewed space program with eyes set on colonizing the Moon. The new “Space Race” is upon us. Join us tonight for a look at why the Moon might be a valuable resource.

Southern California is blessed with Fall evenings that are often warm and clear, and it begins to get dark earlier as we move towards the end of the calendar year.  This fine time to enjoy the night sky at a convenient hour can be enhanced by knowing just a few familiar bright stars as reference points, and the use of any pair of binoculars.   We will discuss getting oriented in the skies of a Southern California autumn and show you easy ways to find some interesting targets for those binos, so you can go out in the yard and amaze yourself, your family, and perhaps even some socially-distanced friends and neighbors with their own binoculars!  Along the way, we’ll decipher those numbers you see printed on the binoculars and, if the sky permits, you’ll be ready to stroll outside for a little binocular observing after the program.

Humans on Mars, What Do We Need to Survive the Red Planet?

November 13  ONLY  (See note above in Planetarium Now section)

For centuries, Mars has called to us and inspired fantastical stories of great civilizations and warrior princesses. Today we know that Mars is a barren, forbidding world, and still we dream of going; not to sail in the canali, but to take our first step toward the stars. What obstacles stand in our way? How far are we from human exploration of Mars? Join us for a look at the dangers of the Red Planet, and the technological advances needed to live there.

Considering a holiday gift of a telescope for that budding young scientist or newly star-struck adult?  You’ll quickly find a bewildering array of choices and a whole new jargon when you shop for a telescope.  We’ll de-mystify things and provide some concrete examples and recommendations for first-time telescope shoppers.  We’ve timed this program early enough to let you get to good suppliers BEFORE they sell out of the best starter instruments!

Believe it or not, there were things other than politics and corona virus going on during 2020, and we will give an overview of the happenings in astronomy and space flight that you may have understandably missed with everything else demanding your attention.

As we head into the holiday season, we’ll discuss the history of various ancient observances of the Winter Solstice, and how they have evolved and melded with our later Judeo-Christian holidays.  People have long felt the need to face the coming of winter with festivities, and customs like the burning of the “Yule Log” and hanging of evergreens seem to far predate the celebration of Christmas in December!  We’ll also have a look at a re-creation of a remarkable planetary conjunction in 2 BC - a leading candidate for a scientific explanation for the Star of Bethlehem.

For centuries humans have gazed at the great winter figure we call Orion and seen a heroic human figure.  For the Greeks it was a hunter with his faithful dogs at his heels.  Deep in the sword of Orion, visible to the unaided eye, is a massive complex of dust and gas, which we now know to be an active star formation region.  We’ll explore this Great Orion Nebula with stunning images from ground and space telescopes and discuss discoveries that reveal the hundreds of potential planetary systems forming within.

With three spacecraft scheduled to depart Earth for Mars in July 2020, we will hopefully see three new arrivals – two orbital insertions and one direct atmospheric entry – in February of 2021. We will review what to expect from these three spacecraft – a Chinese orbiter bearing a lander for later release, an orbiter from the United Arab Emirates, and NASA’s Perseverance Rover – and bring you up to date on critical news and mission timelines.

50-Year Retrospective: The Flights of Apollo -After Apollo 13 - What Changed

After the return of Apollo 13 from its nearly-fatal mission, NASA faced the possibility of halting lunar missions if the causes and fixes for the actual accident were not quickly determined, with solutions put in place to give future missions greater safety margins. All this, at a time when NASAs budget started to shrink, had far-reaching effects on the number and types of lunar missions NASA was ultimately able to fly as Apollo came to an end in late 1972.

After the near-disaster of Apollo 13, nearly 10 months elapsed before the next expedition to the Moon was mounted.  That was time enough for analysis and correction of the hardware issues that caused the Apollo 13 tank explosion, and modifications to the Apollo spacecraft to give greater margins of power and oxygen in case anything similar happened again.  Apollo 14 would visit Apollo 13’s original target, the Frau Mauro highlands, one of the most geologically intriguing formations on the lunar nearside.  Commanding would be the very first American astronaut to fly, Alan B. Shepard, back on active status after 8 years in medical purgatory.  We’ll delve into the image and video archives of this pivotal moment in spaceflight history.

Currently online presentations. Please check the calendar above for the latest shows.

The Drescher Planetarium is located in the middle of the second floor of Drescher Hall on the north side of the Santa Monica College campus. Drescher Hall is the three story brown building on the South East corner of Pico Blvd. and 17th Street. We are in beautiful Santa Monica, south of the 10 (Santa Monica) Freeway and west of the 405 (San Diego) Freeway.​